Mali Mul (Little Peer) – 800 metres away from the Tragos Suite. This beach is the nearest one on your way to Slatine on the island of Čiovo. It is the right choice if you do not want to go to the beach by car.

Sv. Jere (Saint Jerome) Beach – 200 metres away from the Barba Suites. This beach is situated in the small settlement called Mastrinka half way between Trogir and Arbanija. The beautiful pebbly beach located in the vicinity of St. Jerome’s Chapel. (Sv. Jere) will provide you with a natural sun protection in the pine tree shade. It is an ideal place for youth because of a nearby cafe, as well as for a family visit.

Sveti Kriz (St. Cross) Beach – is in the north part of the island, quite near to the St. Cross Monastery (Sv. Križ) in the settlement of Arbanija. It is approximately 1 kilometre away from the Barba Suites and 3 kilometres from the Tragos Suite. A beautifully arranged pebbly beach offers various facilities from water sports to beach volleyball.

Labadusa Beach – situated in the Labadusa cove in Okrug Gornji, ouside the main road. This beach ensures peace and quiet.

Seget Donji Beach – only a few metres from the centre of a little Dalmatian town Seget. This beach attracts many bathers with a cristal clear sea and an excellent view.

Okrug Gornji Beach – a popular beach in the Trogir Riviera, only 3 kilometres from the historic centre of Trogir, in the east of Čiovo. It stretches in 2 kilometres and it is known as the Copacabana of Okrug.

The Slatine Kava (Croatian for Quarry) Beach – In the east corner of Ciovo, not far away from Slatine (2 kilometres) and quite near to the Marjan Hill, right across the sea. It is the biggest among numerous small beaches in the Slatine coves which delight with untouched nature of the pine wood and cristal clear sea. The only facility on this beach is a caffe bar with a wide range of fast food and beverages. The beach is 10 kilometres away from the Barba Suites and it is reachable by car, scooter or bike.

Krknjasi Beach – one of the untouched natural resorts in the area is the cove Krknjaši on the east coast of the island of Drvenik. From the outside the cove is protected with little islands called the Big Krknjas and the Little Krknkas. The Beautiful pebbly beach with sandy ground and shallow water is a true tropical paradise of our sea and that is why it is known as one of the most beautiful lagoons in the Adriatic.

Duga (Croatian for Rainbow) Beach – this popular bathing resort is situated in the east part of Ciovo between Okrug Gornji and Okrug Gornji with a view on the little island of Fumija. It is popular for its excellent gastronomic offer of the Đango tavern as well as for its crystal clear sea. A complete silence, peace and a pleasant shade of olive trees ensure an absolute delight. The beach is accessible by car, scooter or bike.

Okrug Gornji Kava (Croatian for Quarry) Beach – at the cape of Okrug Donji there is a lovely pebbly beach Kava. Due to the tranquil sea and pine wood which ensures a natural shade, the beach is suitable for families with small children.

Bijela Plaza or The White Beach – this long pebbly beach is in the south of Ciovo in the Mavarstica Bay which is characterized by crystal clear sea and beautiful hidden beaches.

Pantan beach – is east of Trogir when heading to Split, in the mouth of the river Pantan. Due to the vicinity of the marsh area the beaches are rich in grit sand and shallow coves. In fact, Pantan is the only sandy beach in the area. Pine wood in the east part of the beach gives a pleasant shade. The whole area is a protected ornithological habitat with a wonderful mill and the Pantan restaurant in the north side of the beach. There is a promenade on the way from Trogir so you can go there on foot but it is also reachable by car, scooter or bike.

Medena – is a marvellous pebbly beach which stretches three kilometres along the coast from Seget Donji to the Medena Hotel. It offers not only a peaceful relaxation but also numerous possibilities for an active holiday. Children can have fun by taking part in various entertainment programmes and facilities on the playgrounds. In the evening you can enjoy walking down a beautifully arranged promenade by the sea or you can dance in some of the many bars and restaurants on the beach. The beach is connected to Trogir by a ferry line. 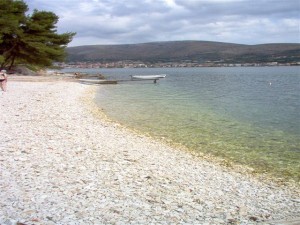 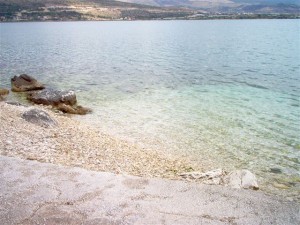 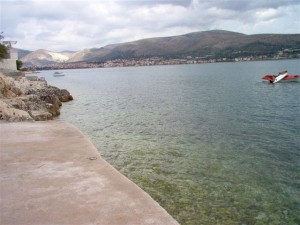 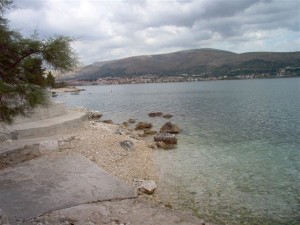